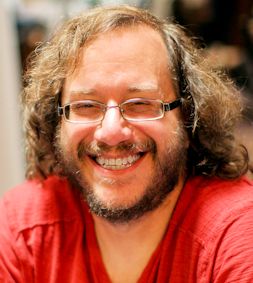 Keith R.A. DeCandido is mostly known as a best-selling, award-winning author, with a metric buttload of both media tie-in and original fiction to his credit. In 2009, he was given a Lifetime Achievement Award by the International Association of Media Tie-in Writers, which means he never needs to achieve anything ever again. His recent and upcoming work includes the Marvel’s “Tales of Asgard” trilogy of prose novels, including Thor: Dueling with Giants, Sif: Even Dragons Have Their Endings, and Warriors Three: Godhood’s End; the Stargate SG-1 novel Kali’s Wrath; the Heroes Reborn novella Save the Cheerleader, Destroy the World; Mermaid Precinct, the latest in his fantasy/police procedural series; A Furnace Sealed, the first in his new urban fantasy series about a nice Jewish boy from the Bronx who hunts monsters; three serialized novellas in the Super City Cops series, Avenging Amethyst, Undercover Blues, and Secret Identities; the short-story collection Without a License: The Fantastic Worlds of Keith R.A. DeCandido; and short stories in the anthologies Aliens: Bug Hunt, Altered States of the Union, Baker Street Irregulars, A Baker’s Dozen of Magic, Joe Ledger: Unstoppable, Limbus Inc. Book 3, Nights of the Living Dead, The Side of Good/The Side of Evil, TV Gods: Summer Programming, V-Wars: Night Terrors, and The X-Files: Trust No One. His rewatches of classic TV shows (various series in the Star Trek and Stargate franchises, as well as the 1966 Batman) have been appearing twice weekly on Tor.com since 2011. He’s also a professional musician (currently the percussionist for the parody band Boogie Knights), an editor of more than 25 years’ standing (working for clients both corporate and private), a second-degree black belt in karate (which he teaches to both children and adults), and probably some other stuff that he can’t remember due to the lack of sleep.